South Park – Screw You Guys. This Is The Best TV Show Ever…

Once upon a time I was a child who had seen two or three episodes of Comedy Central’s South Park and thought it was a badly animated pile of crap that I’d never watch in a million years. Now I’m 23 and of the opinion that it’s fast approaching genius. This isn’t a TV show that you should judge based on your first impressions. But can a show that regularly sets out to humiliate anyone they want be really considered as the best TV show ever made? I don’t see why not.

There’ll be people in the world who look at South Park and think it’s a complete disgrace. No-one is safe from their satirical clutches, not even the disabled or people in poverty. It seems everything is permitted in Matt Stone and Trey Parker’s world. As you can imagine these attitudes have led to plenty of outrage in the media and threats of lawsuits against them. There isn’t anything else on TV that is as controversial.

This is one of the main reasons why I appreciate it so much. Do I want to watch South Park, every episode always providing a shock and a talking point? Or do I want to watch something predictable where everything is sickeningly nice and is essentially just another one of them comedies?

Controversy isn’t the only thing that I like about South Park, though. There’s plenty more on offer:

Of course, as times change, things get polished and South Park is no exception. Everything is now done through a computer which makes producing the show much quicker. It bloody needs to be considering that they usually crank out a single episode in about six days. But the simplicity of the characters is still there, even with the modern improvements that make South Park look fresh. Blood, shit and puke are still frequently covering our screens, maybe even more so. With more detailed images people will be even more grossed out.

South Park wouldn’t be completely destroyed without Eric Cartman but it’d never be the same. The controversy I mentioned earlier, it’s likely Cartman is responsible for the majority of it. No other character represents more things wrong with humanity than this sweet little eight year old kid. He’s tried to make himself look disabled in order to take part in the Special Olympics and win $1000. He’s persuaded Butters into thinking that the world has been hit by a meteor so he can take his place at Casa Bonita. He’s taken a dump on his teacher’s desk to get sent to detention and avoid a fight after school with a girl. He’s a racist, Jew and hippy-hating child with many psychological problems… and yet we love him for it. Strange…

Perhaps the reason we do love Cartman is that he’s an incredibly pathetic child. He’s filled with hate, but one moment he can be calling Token a ‘black bastard’ and then the next he can be crying his eyes out after being tapped on the arm. Weirdly enough, his pathetic side makes our liking of him kind of… OK. He’s such a dumb, racist, fat, ignorant little fucker that it’s OK for us to laugh at how one person can be so screwed up.

As you’d imagine, with a character filled with plenty of senseless insults, Cartman gets many of South Park’s main story lines (check out Scott Tenorman Must Die and Tsst!), and he’s widely regarded as the best character on the show. I prefer Butters, but Cartman is far and away the most important.

3. THEY POKE FUN AT THEMSELVES

They spend the majority of their episodes taking the piss out of other people, but Matt and Trey occasionally take the piss out of their own show. To me, this is an incredibly important thing. It’s great to see a programme that has the maturity to even criticise themselves and to recognise that not everyone is going to like their opinions or the way they show them. Whereas many celebrities suffer from overblown egos, South Park knows its place on the schedules and understands that there’ll be times when watchers voice their dislike. 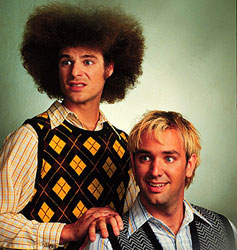 In Cartoon Wars, a two-part episode which relentlessly mocks Family Guy’s joke structure, there is a moment when a character says “I like Family Guy too. The jokes might have nothing to do with the plot but I like that. At least it doesn’t get all preachy and up its own ass with messages.” It’s rare that a programme has such honesty about itself, and it’s one of the main reasons why Matt and Trey gain a great load of respect from me.

Even with Cartman’s constant barrage of insults towards Family Guy…

4. IT GETS PREACHY AND UP ITS OWN ASS WITH MESSAGES

For some people having a message in a comedy show isn’t that important. They just want to sit down, be entertain and be humoured by what it has to offer. But a lot of my favourite comedies have a point to make. Only Fools And Horses’ classic about Del Boy winning millions from a pocket watch speaks about how money isn’t what you’d expect it to be. Extras’ entire second season is about how production companies alter writers’ work until it’s only a shade of what it once was. South Park, though, has explored an incredible amount of subjects and I’ve agreed with many of their opinions on them.

I too am angered by the fact we have to choose between a Giant Douche and a Turd Sandwich every four years (watch Douche and Turd). I too see some of the players of World of Warcraft as fat, pathetic morons who are more in touch with the game than they are their real lives (watch Make Love, Not Warcraft). I too often get up my own ass with messages.

The subjects South Park cover are my main reason for having repeated viewings of every episode. When you compare it to rivals The Simpsons andFamily Guy the lack of competition is almost pitiful despite enjoying them both. I can sit down and watch a Family Guy episode but eventually I become tired of failed efforts at being funny and controversial. The Simpsons has an unrivalled amount of likeability to it, especially with its characters, but doesn’t have enough strangeness about it for me to think it truly brilliant.

To me South Park has everything; the laughs, the messages, the stories, the controversy, the possibility of being shocked by what you see. Others just manage to be good at one or two of those things, whereas South Park manages to be great at all of them and still manages to be clever enough to make its voice heard.

Have you ever seen a TV show which suggests that the makers of a certain iconic series of films literally ‘raped’ their main character in the latest sequel? Or which shows a character openly saying the N word on Wheel Of Fortune (with the clue being “people who annoy you”) and sparking a worldwide outrage? I could go on…

Controversy is easily the thing that South Park is known most for. Matt and Trey’s eagerness to poke fun at anyone, from the Mormons to the homeless, has gotten them into plenty of media outrage and threat of lawsuit. Episodes have even gone so far as being pulled from broadcast and the question as to whether South Park has “gone too far this time” has lingered since it first began. I’ll admit, there have been times when watching certain episodes that I’ve recoiled in the crude humour’s distaste. If you don’t then you’re literally a cold-hearted bastard. As humans it should be in our nature to react when someone less fortunate than ourselves is humiliated.

But more often than not it’s someone who’s got more than they need and is deserving of that humiliation. Do those who believe in the details of Scientology genuinely expect to not be mocked for it? Do people who waste hours and hours of their lives searching for friends on Facebook and all the time wishing they had more actually think they’re caring about what matters? Of course not! You do this shit you’re just asking for humiliation.

I can see why people get sensitive about some of the things in the show, though. It’s all about how you interpret it. You should know that Matt and Trey will target anything, no matter what it is. In their own strange, insulting way they’re treating everyone equally, which is exactly how everyoneshould be treated. There isn’t any malice or hatred.

Well, unless it’s for a specific person that is.

I could go on with another five things that add to my argument for South Park being one of the all-time great TV shows but I think about 1500 words is enough, don’t you? Maybe in the future I’ll write about Butters, the stories, Kenny’s constant deaths, the kids being smarter than the adults, the parodies of classic films etc. There’s so much about South Park which makes it an all-round brilliant show.

I hate to say it, but for me it’s almost a religion. If Matt and Trey heard me say that they’d probably mock the shit out of me.